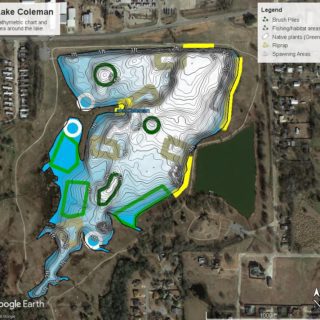 Lake Coleman, with a current surface area of approximately 40 acres, is located within the city limits of Sulphur Springs in Hopkins County Texas. The lake was constructed in the early 1900s as a water supply for the City of Sulphur Springs. A comprehensive renovation of the lake was conducted in 2002 as part of an urban park development to reverse the effects of over 100 years of reservoir aging. However, this renovation only focused on the physical aspects of the lake and did not address habitat for sport fishes. This project builds upon the steps taken by the city by adding the complex habitat needed for a healthy fishery.

Water turbidity is high, with an estimated visibility in April 2018 of less than 2 feet. Aquatic vegetation consisted of shoreline emergent species, including American water willow, spike rush, and the exotic alligator weed. No submersed vegetation was detected in 2018 and Triploid Grass Carp were observed in the system. A 13-lb Largemouth Bass was caught and released in 2013, but no catches of large bass have been reported since. Also, in 2013, anglers reported catching 14-inch crappie frequently.

Since 2013, both angler catches of quality bass and crappie have apparently declined, likely due to decreased available habitat. Recent angler reports suggest the number of keeper-size (≥10 inches) crappie have decreased and they estimate that approximately 10% of fish they catch are harvestable.

The goal of this project is to establish habitat to support a quality fishery in this urban lake. Texas Parks and Wildlife has established American water willow in the system and this is currently the only habitat available in most areas – and due to drought conditions, most of this is currently in water one-foot deep. In the long term, it is desirable that native aquatic vegetation is reestablished in a way that is conducive to both biological and recreational purposes. However, due to the presence of Triploid Grass Carp and prevailing environmental conditions, recovery of many native plant species will be difficult. Habitat enhancements approaches that are resistant to current challenges need to be pursued to support the fisheries in Lake Coleman, long term.

To meet project objectives, an area of approximately 8 acres (20% of the surface area) would need to be improved with a combination of habitat types. Since the substrate of Lake Coleman is primarily sand and silt, wind and wave action can cause significant erosion and high turbidity. To remedy this, 277 tons of riprap, in conjunction with plantings of Giant Bulrush would need to be used to stabilize the substrate and provide additional habitat for both prey and sport species. To improve habitat for cover-seeking species, 120 Mossback fish habitat structures, and 38 brush piles would be deployed. Three spawning habitat sites would be constructed with gravel “pads” and 21 Pennsylvania style black bass nesting structures per site. Due to the lack of hard structure, catfish spawning opportunities are limited; hence 100 catfish spawning boxes would be deployed. If awarded, funding will help meet these objectives to restore fish habitat in Lake Coleman.

All structural fish habitat installed during this project would be quantified, inspected, and monitored by TPWD during installation and thereafter during habitat surveys. The sites selected for the habitat structures were based on angler accessibility and a bathymetric map complied by TPWD. The fish population would be sampled before and after the project to allow for an assessment of the impact of the measures taken to improve the habitat.

Local school shop and agricultural departments will be contacted to involve students with this project and will provide a platform for education on aquatic resources. The scope of school involvement will depend on the desires of the schools and may include habitat assembly and deployment. Information about the project will be shared on the TPWD Facebook page, and a press release will be shared with the media. TPWD will also record GPS coordinates for all habitat structures and share those with the public via our web page. The proximity of the lake to Dallas and visibility of the lake with in the City of Sulphur Springs will make this project a great opportunity for people to experience the message of FOR and the RFHP first hand. Signs will be placed at the two major access points to Lake Coleman detailing the work done to improve habitat and fishing opportunities.

Coleman Lake was highlighted recently as an up-and-coming bass fishing hotspot in Texas! Add Eagle Mountain, Coleman and Austin to the budding list of Texas bass lakes to produce lunkers to shock the imagination in... 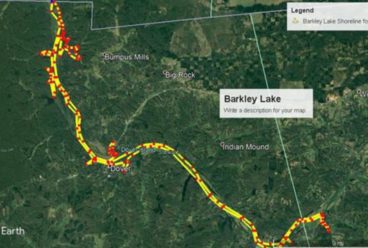 Goals of the Lake Barkley Habitat Improvement Project are as follows: 1) To decrease siltation and the expansion of mud flats by increasing... 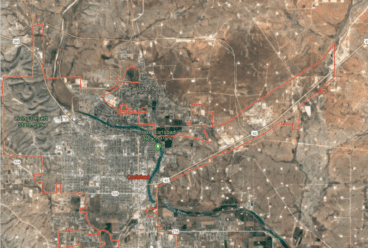 The project seeks to involve the local community, the City of Carlsbad and New Mexico Game and Fish in strategically positioning fish attractors,...