Leaser Lake is a 117-acre impoundment on Jacksonville Branch of the Ontelaunee Creek, a tributary of Maiden Creek located in Lehigh County, Pennsylvania. The impoundment is very popular with outdoor recreation enthusiasts in southeast Pennsylvania.

In September 2006, $4.8 million in grants were made available to help Lehigh County upgrade Leaser Lake. The funds were made available through a number of sources, including $750,000 from the Department of Conservation and Natural Resources’ Community Conservation Partnerships Program, $2.25 million from the Growing Greener II initiative – including $1.75 million in funds earmarked for use by the Pennsylvania Fish and Boat Commission – and $1.8 million through the state’s capital budget. The state grants will be used in conjunction with $500,000 from Lehigh County to make repairs to Leaser Lake dam and improvements to the surrounding areas. Specific projects include major upgrades to the spillway and work to stop seepage through the dam’s earthen walls. The cost of the project is estimated at $5.7 million.

The lake was drawn down 21 feet limiting the pool area to 40 acres during the dam reconstruction work. During the drawdown, the Pennsylvania Fish and Boat Commission (PFBC)  undertook a 3-year effort to add structural habitat to the exposed lake bed. The Reservoir Fisheries Habitat Partnership provided a $10,000 grant in 2011 to PFBC to help offset the costs of the $105,400 project.

Artificial habitats (refuge, spawning, nesting, and nursery) are designed to be effective, long lasting structures aimed at providing habitats that allow fish to accomplish their daily and seasonal tasks with greater efficiency. Some artificial habitats have dual purposes and may also provide increased opportunities for anglers to catch and/or harvest fish (fish attraction) and/or may provide increased surface areas for algae attachment, aquatic insect colonization and for other food organisms which may increase fishery production. Many of these artificial habitats are also designed to allow fish species to accomplish daily and seasonal survival tasks (performance structures), which may also provide an opportunity to increase productivity within some impoundments.

The habitat improvement plan included addition of 250 40 to 200-ton rock-rubble humps at three sites. Rock-rubble humps provide forage type habitats for a variety of invertebrates, crustaceans and baitfish. Rubble humps may also act as fish attractors for walleye, black bass, and panfish. Fish use depends upon location and stone size diversity. Traditionally rubble humps are placed on flats or shoals. Spider-hump and rock-star structures are similar to the rock-rubble humps but with the addition of hemlock timbers to create a more complex habitat structure that may attract more diversity in invertebrate and fish species. These structures provide foraging and ambush cover for walleye, black bass, and panfish. Placement is on shallow flats, slow tapered shores or shoals. Spider-humps are placed in a sinuous pattern, parallel to the shoreline and rock-star structures are placed in a star-shaped pattern. Ten spider-hump structures and 5 rock-star structures were incorporated into the project. Post Stumps are designed to create long lasting, functional vertical shallow-water cover for game and panfish. Post stumps utilize specialized agricultural fence posts driven into the impoundment’s substrate in addition to rock rubble humps to create simple shallow water vertical ambush cover for black bass. Post stumps also create simple microhabitat for aquatic invertebrates. These microhabitats serve as habitat for prey resources for predators, thereby increasing prey-predator efficiency. Post stump clusters (550) were placed at four sites. Root wads are large tree butt sections with the root system attached. The root wad is anchored by trenching the butt of the log into the shore with the root system exposed submerged in the water. The root system provide excellent course brush type habitat for gamefish and panfish. Sixteen root wads were distributed among three sites.  Exposed erodible shorelines will be stabilized with rip-rap. 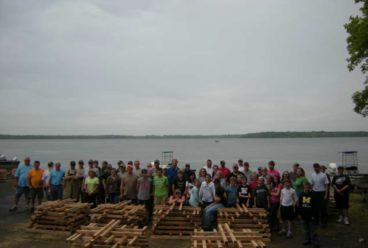 Pymatuning Reservoir is the largest impoundment in Pennsylvania at 17,088 acres. With 70 miles of shoreline along the reservoir, PA DCNR is responsible... 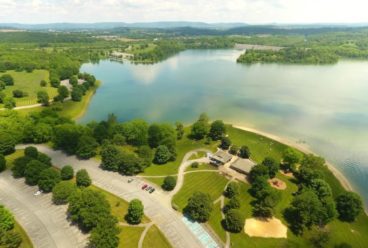 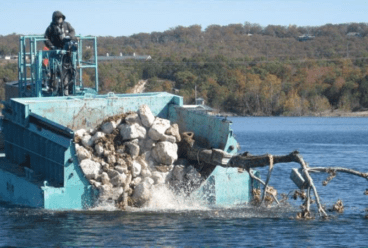