Several early attempts to start a national aquatic habitat initiative failed to gain traction. In 2006 a consortium of federal, state and private natural resource agencies/groups were successful in getting national legislation to fund the National Fish Habitat Action Plan (NFHP). The intent of NFHP was to create Fish Habitat Partnerships that would focus aquatic habitat restoration efforts based on regional or species-specific habitat needs. Aquatic habitat restoration in reservoirs was not part of the initial vision. A dedicated group of state agency fish chiefs, individuals from federal agencies and corporate representatives worked together to raise the profile of reservoirs within NFHP. A series of meetings were held to gain support for establishment of a Reservoir Fisheries Habitat Partnership (RFHP) culminating in a May, 2009 meeting at Big Cedar Lodge that was sponsored by Bass Pro Shops.

A Strategic Plan was drafted thereafter and presented to the NFHP Board which recognized the RFHP in October, 2009.

RFHP founders recognized that federal funding for reservoir habitat restoration would be limited and that no single agency could address the scope of habitat needs under their jurisdiction without a means to form public/private partnerships. The Friends of Reservoirs (FOR) Foundation was established in 2010 with the financial support of Bass Pro Shops. FOR functions as the financial arm of RFHP and provides a mechanism for tax deductible funds to be raised at the local level to support local reservoir habitat restoration projects. Local and/or state-wide angling or conservations groups can become FOR members and become part of a nation-wide network of professional fisheries biologists and other conservation-minded citizens to restoring and revitalizing reservoir fisheries habitat to ensure that future generations enjoy outdoor recreational opportunities on our reservoirs. 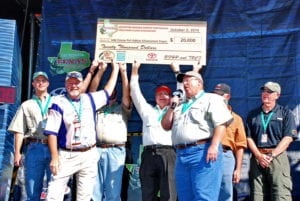 Seven Coves Bass Club received the first project funding in 2010 to continue the native vegetation efforts on Lake Conroe. Since that inaugural project, 41 additional projects have been funded in 18 states.